‘Inside on a wooden bunk lay a young Indian woman. She had been trying to have her baby for two days. All the old women in the camp had been helping her. The men had moved up off the road to sit in the dark and smoke out of range of the noise she made. She screamed just as Nick and the two Indians followed his father and Uncle George into the shanty. She lay in the lower bunk, very big under a quilt. Her head was turned to one side. In the upper bunk was her husband. He had cut his foot very badly with an axe three days before. He was smoking a pipe. The room smelled very bad.’

After reading the brilliant but lengthy Napoleon the Great and studying PhD literature on Scottish Gypsy Travellers for a year, I needed a little light relief. This came in the form of some short stories from Ernest Hemingway, an author who must feature near the top of any greatest-writer-of-short-fiction list. I had previously read very little Hemingway but decided to kick off with his 1924 collection ‘In Our Time’.

Hemingway is something of a rock star in the literary world. He socialised with the likes of James Joyce, Pablo Picasso, and F. Scott Fitzgerald in Paris in the roaring twenties – not a bad sounding board for any first drafts of which you’re not quite sure. Nor did Hemingway have any shortage of life experience with which to inform his work. Ambulance driver in World War 1, travel writer for the Toronto Star, bullfighting aficionado, and multiple plane crash survivor are all roles which provide rich material for fiction. Perhaps most celebrated for his works ‘For Whom the Bell Tolls’ and ‘The Old Man and the Sea’, Ernest Hemingway was awarded the Nobel Prize for Literature in 1954 and took his own life in 1961. 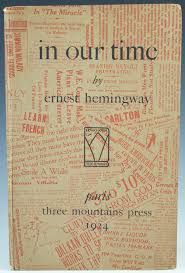 I found Hemingway’s prose jarring at first. Short, declarative sentences advance the narrative but seem to leave little room for emotion or character exploration. This is prose shorn of all the trimmings – no fat, little punctuation, and not an adverb within a hundred miles. ‘Indian Camp’, the first story in the book, is a perfect example of this. I was initially lukewarm on Hemingway’s style, which I considered lacking emotion, until I understood what he was doing. The American writer ascribes to ‘iceberg theory’. This dictates that a writer should focus upon events on the surface of the story, and leave the deeper themes open to the implicit interpretation of the reader. An example of this is in the prose quoted above. Another writer could fluff this section out to 500 words, exploring gender culture, marriage, and socio-economic issues. Instead, Hemingway prompts the reader to do the legwork for him. What resulted was a more rewarding experience as I put together the pieces for myself.

My two favourite stories bookended the volume. In ‘Indian Camp’ and ‘Big Two-Hearted River’ Hemingway uses Iceberg Theory to perfection. In the latter, a reader might miss the primary narrative altogether, so eloquent is Hemingway’s depiction of a fishing trip in the countryside. In both of these stories, the protagonist is Nick Adams. Nick is a semi-autobiographical mechanism with which Ernest Hemingway explores America. His status as such ensures that the modern reader is able to see the world through Hemingway’s eyes, a fascinating prospect and one which provides Hemingway with the opportunity for direct social commentary.

‘In Our Time’ was an entertaining lesson for me as a writer of short fiction. The age-old advice of ‘show, don’t tell’ was given a new dimension for me. Hemingway’s miserly approach to word count made my own prose seem clumsy and pretentious and my trusty red biro will go through first drafts with Ernest in mind in the future.

***Thanks for reading. Find my other reviews below…***